Day 87 of My 90 Day Painting Challenge 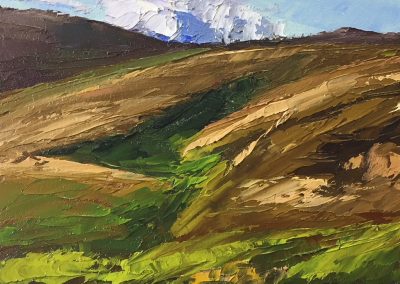 There’s a Bear in Them There Hills

There’s a Bear in Them There Hills

Ok, I know this is Alaska… but once in awhile, my Southern childhood accent just pops in my head and I can’t get it out. This is the case with this one. I know you can’t see the bear — but there is one there. And, off to the right that isn’t in the painting, there is more.

So you just can’t get in a car and drive through Denali. I think they hand out passes by lottery system for that. The rest of us have to go in a bus. One of the people on the bus had amazing eyes and spotted the bears first. Our drive had an incredible video camera that could zoom in and show the video on monitors throughout the bus.

The first thing we saw was a bear standing up and lifting (we found out she was a she) her arms. She would then run back, frantic, turn around stand up and lift her arms again. There was a little cub running past her.

The driver moved the camera to what the bear was looking at. It was another bear eating something.

We realized the bear was eating her cub.

My heart was breaking for her. Her stress, sadness and anger were so obvious in her body language. We all gasped when we realized what was going on.

The driver then told us that when male bears want to mate, if the female has cubs, he knows she won’t mate with him while her cubs are around. So he kills them. And if he’s hungry, he eats them.

We aren’t sure how everything played out. I hope the other cub stayed safe.

But, I think of that mama bear and my heart breaks for her.