Day 73 of My 90 Day Painting Challenge 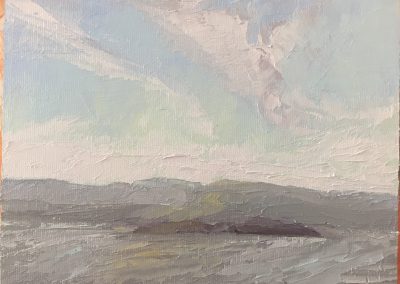 View from Dinner at Giovanni’s

View from Dinner at Giovanni’s

Today is a cruising day so actually there isn’t that much too see: a lot of water and sky. However, last night at dinner as we were leaving the Vancouver BC area, I saw this scene. I was interested in the sweeping of the clouds and the bluish-greenish sky against the gray rolling hills and sea. So, I decided to paint this today.

We had dinner at one of the specialty restaurants: Giovanni’s and was served by a young man who told us to call him Austin Powers. He’s from India and has two young children under 5. I asked if his children knew him when his contract was up — he said yes because every night he does video calls. How difficult this must be for families! Kevin and I were talking about it and he pointed out that many people on the ships were happy to have a job. Except for the entertainers – most are from countries with less opportunity. The woman who did my feet last night is younger – from Jamaica — and you can tell she likes traveling and is excited that after their Alaska run they’ll be doing Hawaii as the repositioning and then Australia! I think it would be worth working on a ship to see those places! (Australia is on my bucket list – grateful that I’m fulfilling Alaska!)

It is a challenge painting on a ship: tight quarters, I have to consciously be careful (which if any of you have ever seen my studio  you’d wonder how I could not get paint everywhere!) and of course, the lighting and of course: fun! Kevin asks me every time we go on vacation why I don’t write it off. While I am ALWAYS looking for paintings, I guess I felt unless I actually painted it didn’t count. So… even though I have to take time out of our day to paint and blog…he’s happy with the end result.